For complete results and recap analysis, check out DCI.org. Congratulations to The Blue Devils.

Were you there or did you watch it live? What were your favorite moments of the season? Leave a comment and let us know what you thought of the 2014 DCI season.

DCI World Championship Prelims are tonight. So, in keeping with the big events to come this week we invite you to take a listen to NFL quarterback great Steve Young and his observations about DCI. Thanks to Carlos Johnson for the video tip.

5 Simple Instructional Tips That Will Give You Immediate Results

Today’s guest post comes from Matthew Raynor and his new percussion blog drumsimple. Matt is currently an instructor at Palmetto Percussion, a World Class indoor drumline and writes about his experiences and teaching on his blog. Although this post was written from a drum corp/indoor line perspective, I think these tips would be great for any ensemble. As always, we encourage your to leave you comments below. You can follow Matt on Twitter.

5 Simple Instructional Tips That Will Give You Immediate Results

I am always looking for results as an instructor. Whenever I finish with an individual lesson, a sub-sectional, or an ensemble I am always tracking progress of the student(s). Even in the middle of rehearsals, I am taking note of the immediate effect of my comments. Did the student improve? What contributed to the improvement? These questions are constantly floating around in my head.

Over time, patterns emerged and I began to see improvement in my students at a quicker pace. I also began to see their spirits rise and them enjoying drumming more. It’s hard to see or hear improvement in your playing from day to day. You could look at your first video/recording of the year and compare it with your final performance of the year and the difference would be drastic. You know that feeling when you see how far you’ve come as an individual or as part of a group? 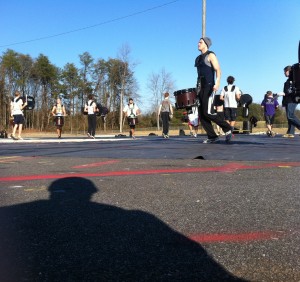 It’s a great feeling! It makes you want to get out there and practice some more!!

Now, if you can lead your students to drastic improvement from day to day AND they are aware of it, you’ll be creating a self-perpetuating machine for improvement. Students will be motivated to get better when they show up to rehearsals and you’ll be more eager to see how far you can take your ensemble.

These tips are simple enough to include in your next rehearsal. Try just using one of them and make note of the results you get.

These are 5 of the best ways I’ve been able to get drastically improved results out of groups that I teach on a regular basis and that I have stepped in front of for the first time.

I think some involved discussion about this topic would be beneficial to both students and instructors. Getting the perspective of not only the instructor but the student will provide a deeper understanding of what students are looking for and notice the most nowadays.

Let me know what you think below. I removed the need to include your email to comment. I hope this might encourage some to contribute.

Thanks for reading and good luck to any WGI groups embarking on their first show this weekend!

James Doyle was recently announced as the winner of our “2010 Year in Review” Contest. In a podcast soon, he and some of his colleagues will be discussing WGI and everything it has to offer. He also noted that we did not have much WGI content on the site, so to that end, here is the “Best of WGI 2010.”

What were your favorite WGI moments in 2010? Of all time? What would you like to hear us talk about on our WGI focused podcast with James Doyle? Any questions for a WGI staff member?

Originally posted on DrumChattr on January 5, 2011.

This video features the exhibition performance by Pulse Percussion 2010 at the Centerville Exhibition. Pulse won their first title (Gold Medal – 96.375) with “Worth the Wait” at the 2010 WGI Championships. Congratulations, Pulse!

Originally posted on DrumChattr on October 12, 2010 by Dave Gerhart.

The Concord Blue Devils A Corp won their 14th DCI Championship on Saturday night in Indianapolis. The Blue Devils scored a 98.90 in their final performance. The Cavaliers (97.750) won 2nd place and the Bluecoats (96.400) placed 3rd. Phantom Regiment received high honors in percussion followed by The Cavaliers and Bluecoats.

The Concord Blue Devils B Corp won the 2010 DCI Open Class Championships with a score of 97.55. They also received high honors in Percussion. Second place honors go to the Oregon Crusaders (94.00) and third place goes to the Spartans (93.60). For more information, check out Drum Corps International. Congrats to all of the corps for another great summer of music.

Originally posted on DrumChattr on August 15, 2010 by Dave Gerhart.